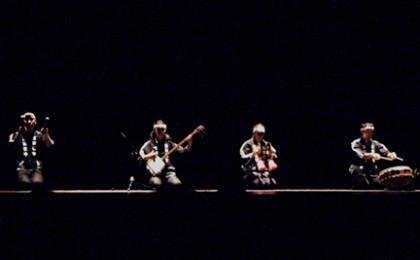 Northern Japan, where the winters are most severe, is the home of “Tsugaru Jamisen”, a large and robust style of SHAMISEN (three stringed lute). The sound of the shamisen is both percussive and energetic, yet there is also a sad touch to much of the music played on it. When the BACHI , a large plectrum, strikes the skin, the sound echoes within the taiko part (the body), and the force of the blow hits the player in the stomach. This piece has four parts: the initial section is an improvisation while the other three are based on “ADOHADARI” by the shamisen master Yamada Chisato.