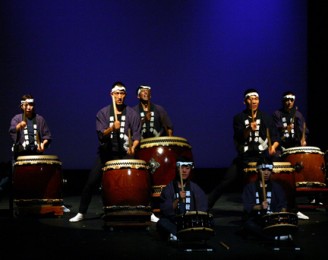 The Chichibu-Yatai-bayashi is instrumental music mainly played with taiko drums on dashi floats during the Chichibu-matsuri festival, a major annual festival held December 2-3 in Chichibu, Saitama. Yatai-bayashi is played inside the floats and cannot be seen from outside but plays an important role in directing the movement of the dashi.

The dynamic beat of the “Chichibu Yatai-Bayashi (Chichibu Festival drum music)” echoes through the night. At seven o’clock in the evening, six ornamental floats decorated with lanterns are paraded from the Chichibu shrine. Local young men riding on the floats shout directions for where the floats should proceed. The destination will be an “otabisho” (the resting place for a god) about one km away from the shrine.

When the floats, which weigh about 8 to 10 tons each, come to the steep slope called “Dango-zaka”, the people pull them up the slope one by one while being cheered on by the sound of drums and wooden clappers.