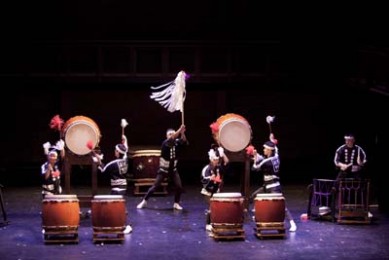 Kiyoshi Nagata learned the song from Daihachi Oguchi and Tomomatsu Misawa, when he was a member of Toronto Suwa Daiko. Kiyoshi performed this song frequently along with other Osuwa Daiko repertoire: Hiryu San Dan Gaeshi, Suwa Ikazuchi, Isami Goma, Misha Guji Yabusame, Amano Naru Tatsuo Dai Kagura and Suwa-ko Bayashi as a performer and director of Toronto Suwa Daiko from 1982 to 1992.

The song is based upon Onbashira, a festival held every six years in the Lake Suwa area of Nagano, Japan. The purpose of the festival is to symbolically renew the Suwa Taisha or Suwa Grand Shrine. “Onbashira” can be literally translated as “the honored pillars”.

The Onbashira festival is reputed to have continued, uninterrupted, for 1200 years. The festival is held once every six years. However the locals may say “once in seven years,” because of the traditional Japanese custom of including the current year when counting a length of time.

In the woods of the sacred Yatsugatake Mountains, four huge trees are felled and brought down to the village to be set up at the four cardinal points around the great temple. While the huge trees are being transported, a “kiyari-uta” a woodcutters song, is performed to the accompaniment of drum music.

The festival which comprises three ceremonies called “Felling in the Mountains”, “Transport to the Village” and “Erecting the Pillars”, has been observed since time immemorial, and the entire population of Suwa takes part in it.