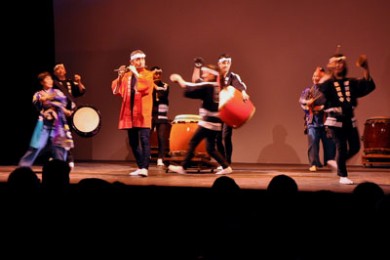 At the time of the autumn equinox, the people of Aomori visit Iwaki Shrine at the foot of sacred Mt. Iwaki to worship. On the last day, they undertake their annual pilgrimage to the summit, carrying colourful banners and wearing white robes.

The long procession is accompanied by hayashi: katsugi taiko (portable drums), flute, tebira (cymbals) and nenbutsu (chanting). They make two ascents: one at night to see the sunrise and the second in daylight. After the purification ritual, the pilgrims descend the mountain accompanied by hayashi.

Gezan Bayashi, literally means music for decending the mountains.The origins of the pilgrimage, also known as Oyama-sankei, dates back to the Genroku era (17th-18th century). Mt. Iwaki, an elegant 1, 625m volcanic cone with its views over the Tsugaru Strait to the northern island of Hokkaido is locally known as Tsugaru Fuji.

An adaptation of Gezan Bayashi was recorded under the title of Yamadera.