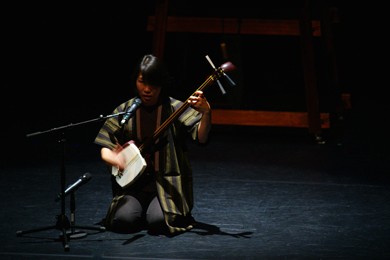 In winter, the northern part of Japan lies buried beneath a heavy, cold white blanket. Winters there have always been harsh, but were especially so in the period before the rise of modern transportation and mass communication. In those not so distant days, winter was a time of isolation, and there was little with which to pass the long, monotonous nights.

One of the few sources of entertainment would have been the blind traveling shamisen players who had no choice but to brave the elements in order to eke out a meager existence.

KUDOKI is a long narrative type of song which those itinerant musicians often performed with shamisen and voice. In tonight’s song, the shamisen will be played in an intense and improvised style to supplement the vocal parts and capture the rugged nature of the landscape which comprises northern Japan.