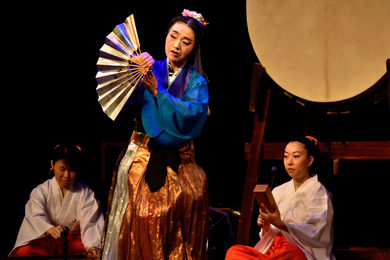 In this piece, a variety of of wooden instruments such as hyoshigi, settaku, mokugyo, hyotan and shinobue, are employed to create the impression of a bamboo grove. These sounds are accentuated by the miya daiko, chappa, clay whistle as well as a playful solo on two uchiwa daiko.

Although originally composed for recording in 1997, this piece was performed live twenty years later in 2017 featuring dance artist Chieko Kojima from Kodo.

This song was aslo featured as the theme song for the National Film Board of Canada short film Shiwa Shinzan by Reiko Loader.